Some of life’s key building blocks — known as nitriles — have been discovered by scientists at the heart of our Milky Way galaxy.

They were spotted in a molecular cloud of gas and dust by a team of international researchers using two telescopes in Spain.

Nitriles are important building blocks for RNA – a DNA-like nucleic acid that is present in all living cells.

Experts said their discovery suggests that nitriles are among the most abundant chemical families in the universe, providing support for the “RNA World” theory of the origin of life.

This suggests that life on Earth was originally based only on RNA and that DNA and protein enzymes evolved later.

RNA can perform both functions: to store and copy information such as DNA, and to catalyze reactions such as enzymes.

According to the ‘RNA World’ theory, nitriles and other building blocks for life do not necessarily all have to have originated on Earth itself.

Discovery: Some of life’s key building blocks — known as nitriles — have been discovered by scientists at the heart of our Milky Way galaxy. They were spotted in a molecular cloud of gas and dust (similar to the one in the picture) by a team of international researchers 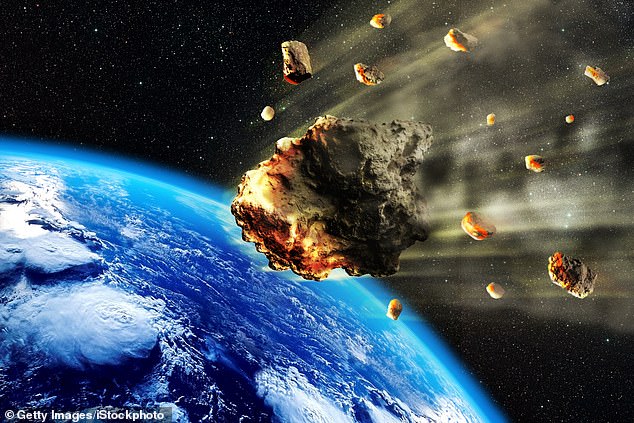 Experts said their discovery suggests that nitriles are among the most abundant chemical families in the universe, providing support for the “RNA World” theory of the origin of life. This suggests that nitriles may have originated in space and ‘lifted up’ to young Earth in meteorites and comets (stock image)

Life on Earth may have started thanks to a modified version of the modern DNA sister molecule, scientists believe.

DNA is the backbone of life and almost all of our planet depends on it, but on the original Earth, a primitive version of its lesser-known sister — RNA — was the focal point for evolution, experts say.

RNA is structurally similar to DNA, except that one of its four fundamental pieces, thymine, is replaced by uracil.

This changes the shape and structure of the molecule, and researchers have long believed that this chemical was vital to the development of Earth’s first life forms.

An accidental discovery by Harvard academics published in December 2018 indicated that a slightly different version of RNA may have been the key ingredient that allowed life on Earth to flourish.

Scientists argue that a chemical called inosine may have been present in place of guanine, giving rise to life.

This small change in the bases, known as nucleotides, may provide the first known evidence of the “RNA world hypothesis” — a theory that claims RNA was integral to primitive life forms — they say.

They may also have originated in space and ‘lifted’ to young Earth in meteorites and comets during the ‘Late Heavy Bombardment’ period, between 4.1 and 3.8 billion years ago.

In support, nitriles and other precursor molecules to nucleotides, lipids and amino acids have been found in recent comets and meteors.

The question is, where in space could these molecules come from?

Primary candidates are molecular clouds, which are dense and cold regions of the interstellar medium and are suitable for the formation of complex molecules.

For example, the molecular cloud G+0.693-0.027 has a temperature of about 100 K and is about three light-years across, with a mass about a thousand times that of our sun.

There is no evidence that stars are currently forming within G+0.693-0.027, although scientists suspect it could evolve into a stellar nursery in the future.

The team of experts discovered a range of nitriles, including cyanosole, propargyl cyanide, cyanopropyne and possibly cyanoformaldehyde and glycolonitrile, none of which had previously been found in the cloud, known as G+0.693-0.027.

Lead study author Dr. Víctor M. Rivilla, a researcher at the Center for Astrobiology of the Spanish National Research Council, said: ‘Here we show that the chemistry taking place in the interstellar medium is able to efficiently form multiple nitriles, which are essential molecular precursors to the ‘RNA World’ scenario.’

He added: ‘The chemical content of G+0.693-0.027 is comparable to that of other star-forming regions in our galaxy, as well as to solar system objects such as comets.

“This means his research could give us important insights into the chemical ingredients that were available in the nebula that gave rise to our planetary system.”

The team of experts discovered a range of nitriles, including cyanosole, propargyl cyanide and cyanopropyne, which had not yet been found in G+0.693-0.027, although they had been reported in 2019 in the TMC-1 dark cloud in the constellations Taurus and Auriga, a molecular weight cloud with very different conditions than G+0.693-0.027.

The scientists also found possible evidence of cyanoformaldehyde and glycolonitrile. 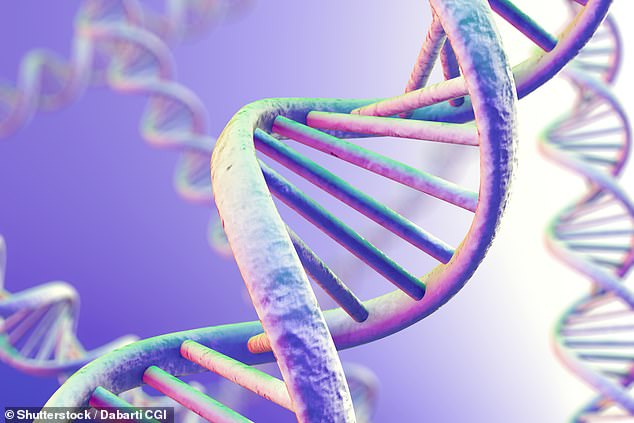 Fellow researcher Dr Miguel A Requena-Torres, a lecturer at Towson University in Maryland, said: “Thanks to our observations over the past few years, including the current results, we now know that nitriles are among the most abundant chemical families in the universe.

“We’ve found them in molecular clouds at the center of our galaxy, protostars of various masses, meteorites and comets, as well as in the atmosphere of Titan, Saturn’s largest moon.”

Author Dr Izaskun Jiménez-Serra, also a researcher at the Center for Astrobiology of the Spanish National Research Council, said: ‘We have so far discovered several simple precursors of ribonucleotides, the building blocks of RNA.

‘But there are still important missing molecules that are difficult to detect.

‘We know, for example, that life on Earth probably also required other molecules, such as lipids, which are responsible for the formation of the first cells.

“Therefore, we also need to focus on understanding how lipids can be formed from simpler precursors available in the interstellar medium.”

The study is published in the journal Frontiers.

DNA AND RNA EXPLAINED: THE MOLECULES CONTAINING THE GENETIC INFORMATION FOR LIFE

DNA – deoxyribonucleic acid – is commonly known as the molecule found in the nucleus of all our cells that contains genetic information.

It is shaped like a double helix and is made of small sections called nucleotides.

Each nucleotide contains a nucleobase, a sugar and a phosphate group.

The sugar component in this particular molecule is called deoxyribose and forms the D in DNA.

This is a cyclic carbon-based chemical with five carbon atoms arranged as a pentagon.

At the second carbon atom is a single hydrogen atom in deoxyribose.

An extra oxygen can also be added to this.

In this case, the oxygenated chemical then forms what is known simply as ribose – the R in RNA.

Shape of RNA and DNA

Ribose can do almost everything that deoxyribose can and also codes for genetic information in some cells and organisms.

When the oxygen is present, it drastically changes how the chemicals bind and sit next to other molecules.

When oxygen is present – in RNA – it can take different forms.

When oxygen is not present at this specific location – in DNA – the molecule forms the iconic double helix.

DNA is often broken down into RNA and read by the cells to translate and transcribe the genetic code to make proteins and other molecules essential for life.

RNA uses three of the same base pairs as DNA: Cytosine, Guanine, Adenine.

The other base pair, Thymine, is exchanged in RNA for Uracil.

RNA is also commonly found in simpler organisms, such as bacteria.

It is often also a virus, with hepatitis, flu and HIV all forms of RNA.

All animal cells use DNA, with one notable exception: the mitochondria.

Mitochondria are the powerhouses of the cell, converting glucose to pyruvate and then to adenosine triphosphate (ATP) via the Krebs cycle.

This process is all done in this one organelle in the cells and ATP is the universal form of energy and is used by every aerobic organism.

Inside the mitochondria is a small strand of RNA that is unique in the animal kingdom.

It is passed on exclusively from the mother (the father lives in the sperm but is dissolved during fertilization) and allows humans to trace their maternal lineage through time.